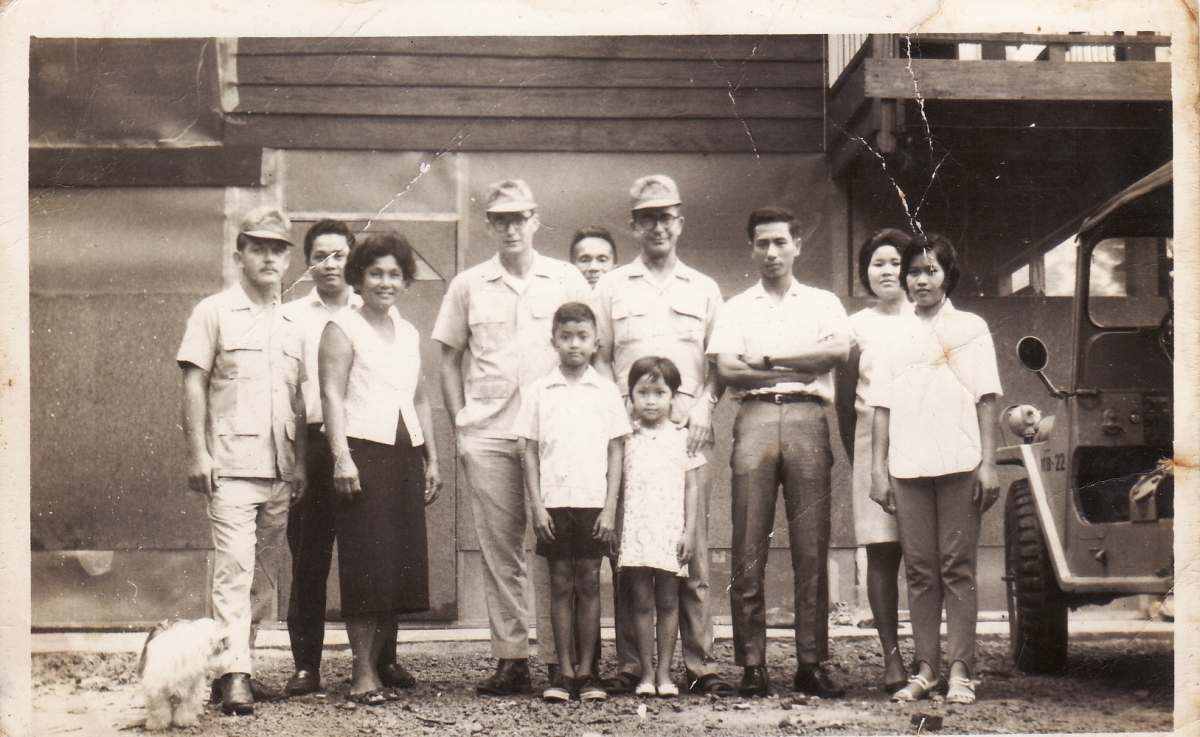 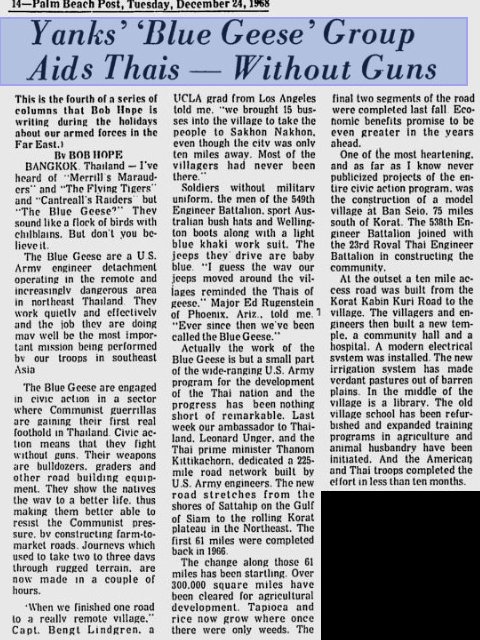 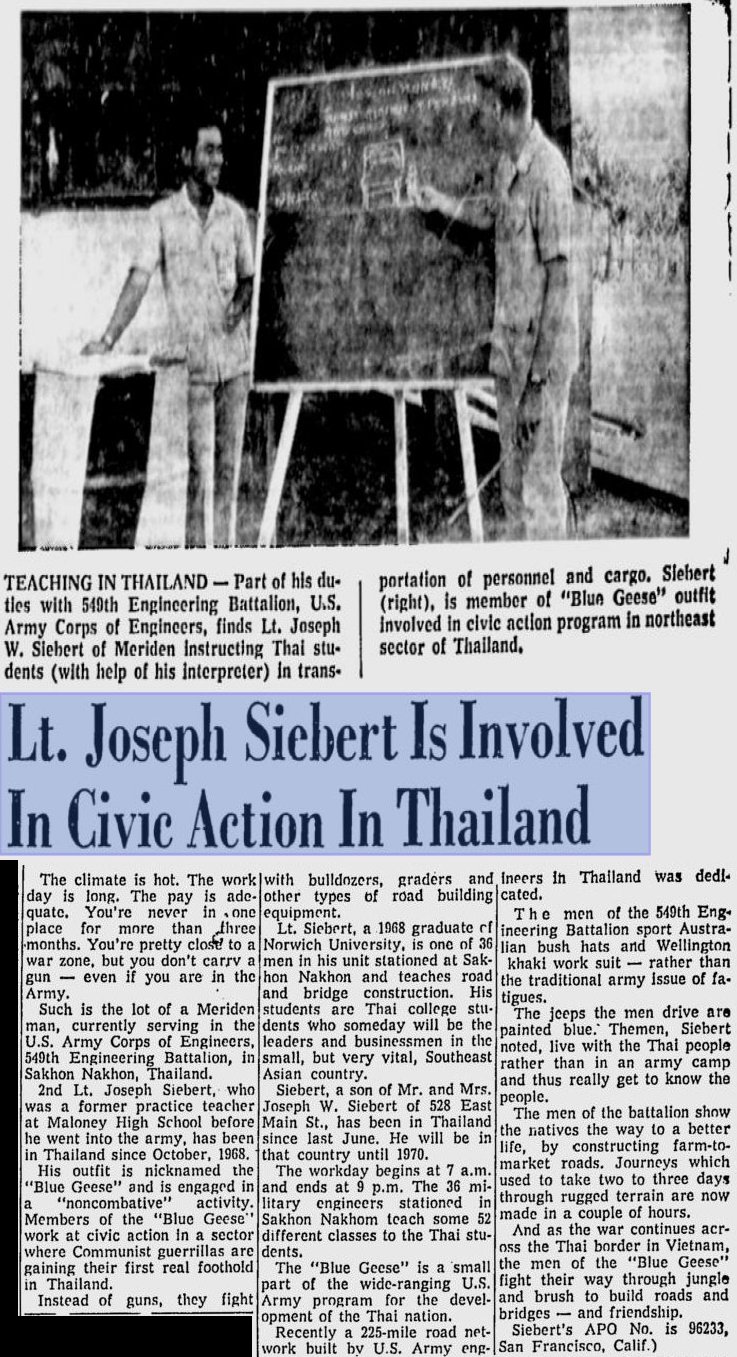 This Operation was a far reaching work throughout Thailand. It was The 549th Engineer Detachment UT, but it extended beyond Thailand into both Laos and Cambodia. It worked with local Thai governments in building houses, schools, local government building, communication centers, etc.

The 549th was a top secret unit with equipment that was undercover with the blue vehicles, how could they be missed. They wore civs (civilian clothes) most of the time.

Before the transfer, many of the troops who transferred to the 549th (Eng Det) helped move The 54th (Eng Co) to Northeast Thailand.

While in The 549th (Eng Det), I did extensive work at Commo sites because of security. That is one of the reasons: I understood what was happening in Thailand, Laos, and Cambodia.

I can't even tell the whole story of the 549th (Eng Det) without spending days to write down everything that I remember.

I hope that just a small amount of information about the 549th (Eng Det) will broaden the understanding of just how involved USARSUPTHAI and the 44th Engineer Group were in S.E.A. What I saw with the 549th (Eng Det) is one of the reasons we were so involved with the Thai People. We used our skills to build communities.
This shouldn't come as a surprise, but increase your understanding about why and how most troops in Thailand were chosen before they reached Thailand.

There were very few problems with the Troops and the Thai Government and Thai People. We trained Thai Troops and Police, worked with Thai People everywhere from house girls to the most important work done. We are the Men and Women, who Helped Thailand to become what it is Today.

Mark
The Blue Goose had an office next to USARSUPTHAI Headquarters. I was part of the 558 SCHMGS, which supplied then with powder blue equipment. Whenever I mention the blue goose every thinks I am crazy.

I was also attached with the 46th, assigned to 9th Log.

I didn't know that the 549th (Eng Det) had two HHQs, until you said there was one next to USARSUPTHAI, but I do
remember Blue Goose Vehicles there.

The other HHQ was next to 44th Engineer Group HHD. That was where our Hooches were located on Camp Friendship and out Motor Pool was across from the Dispensary. We were on two corners of the major streets of Camp Friendship.

Anyone, who thinks the Blue Goose didn't exist, has no idea as to the kind of operation and how close they worked with the Thai Government.

We work on top secret places all over Thailand. We work from Northeast Thailand, long Burma, and
Northwest Thailand.

There are Commo (Communications) Troops that can say they heard the Blue Goose over the Communication System.

Looking for any info:

KIA - SP7 Rufus Holt (Rusty), He was with the 549th Engineer Detachment, Construction Foreman, killed in a construction accident on January 31, 1968 at Camp Raum Chit Chai, Sakhon Nakhon Thailand. Trying to get info to help out his daughter. - Submitted by O.D. on 15 August 2008 - 10:34pm.

Beginning with the deployment of American Military Troops in South Vietnam, Thailand became even more important than just overseeing the war in Laos. It now became a logistical, supply and communications hub for the war in Vietnam. From Thailands 6 RTAFBs American Air Force planes took off and bomb North and South Vietnam, Laos and Cambodia in support of the war effort in Southeast Asia. In fact, more sorties were flown from Thai bases against North Vietnam than the combined Air Force Bases located in South Vietnam and the Naval Aircraft Carriers located off the coast of Vietnam on Yankee Station.

This is a work in progress and all information concerning the 549th Engineer Detachment and "Operation Blue Goose" is greatly needed and appreciated. If you have info, pictures or comments send them to me jjwilsonjr@yahoo.com and I'll get them posted on this site. - Joe Wilson - Webmaster