I am working on updating the individual history of other units, documenting their time in Thailand. Thanks for everyone's support, hope this change will be an enhancement to the site.
Korat's 10,000 Barrel Fuel Storage Tank Farm Under Construction 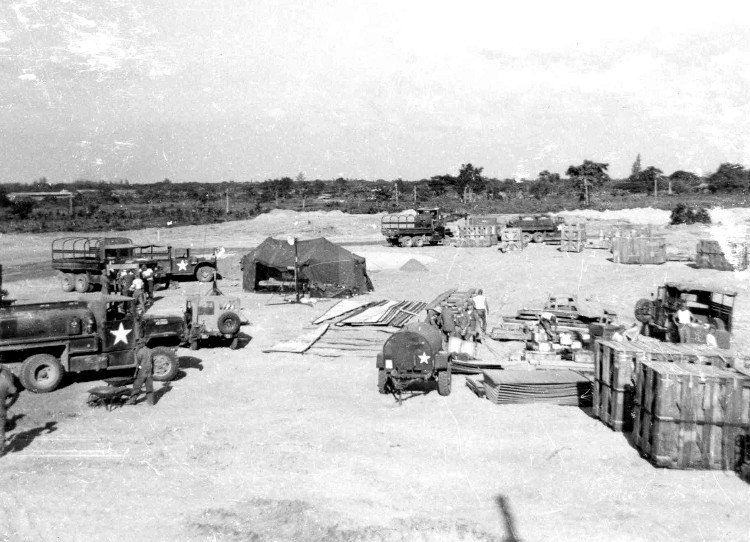 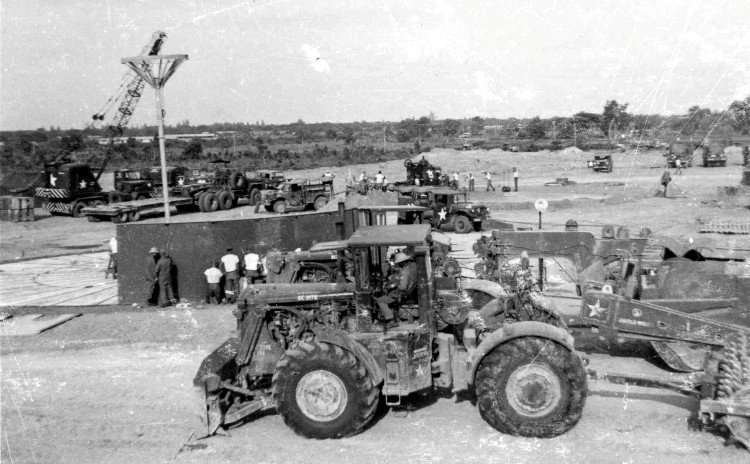 The next picture shows that the floor is done and the first ring is being assembled. In the background you can see the floor is being poured with concrete by a batch mixer. Also in the lower picture the heavy equipment is still being used to level and prepare the ground for the next tanks. A crane is in use in the background and has just unloaded crates of another 10,000 barrel fuel storage tank from a lowboy tractor trailer. This is a classic picture of cooperation the unit had with each other (697th and 809th). It was this cooperation that got the job done.

One day, I was lifting a pallet with 4 Barrels. The pallet broke apart and fork pierced one of the barrels. The Barrel was black with an orange stripe around the top.

I knew from the smell it was a chemical. Having help spraying chemicals on farms and ranches. I knew, that there was a need to clean myself and equipment. The huge problem is I didn't document what happened with pictures, ID numbers on the barrel, or the date.

Here is the Questions: What do the camps and bases look like today??? How many of us are Diabetic??? What does the jungle look like along
the roadways today???

Hi Mark! Camp Kanchanaburi does still exist, as the 9th Inf Div of the Thai Army occupies it to this day. We turned over the camp to the Thai Army officially on 1 July 1969. Our company was disbanded and we were sent everywhere! I hate to say it, but you were dealing with a very potent chemical, as this was the only one that would control the Jungle growth over there. Diabetics?? A lot of them. We have had several of our guys stationed there have since passed away from Agent Orange and others are gravely sick. Terrible stuff.
Dick Okland

Thought I would share a few memories.  I was a Chaplain (Protestant) at Vayama in 1968 and moved over to the 538th Engrs in 1968 (at Samae San).  In those days, Samae San was just mud.  We provided "Christmas" for a school run by Baptist missionaries somewhere near rayong.  Amaster mechanic from the deepwater port created out of scrap metal a complete set of playground equipment for the school; troops raised funds to pay the teacher for a year and one GI in a red and white Santa hat played Mr Claus (at least we understood.  And the children enjoyed the food we brought.  On the other side, back up at Pattaya, the Roman Catholics who provided our chaplain support began to operate an orphanage.  The Rev  Fr Ray Brennan (the priest you referred to) spearheaded the project and in 1998 when I visited Pattaya (quite a different "village" from the 1968 days, Fr. Ray was head of a large organization devoted to caring for those who were uncared for, orphans, those with disabilities, and elderly who lacked family connections, as well as the blind.  When I was there they were caring for over 500 persons.  They always need help and look for volunteers.  Fr. Ray was not so well when I saw him in 1998 and now has passed on.  Others carry on the work which was his dream.  I remember the day when he told me the story of driving some GIs to a massage parlor.  They needed a ride and he had the truck.  Yes, I suspect that not too many clergy have the stories he could tell.  He was from Detroit and spoke Thai well, but with a clipped mid-western city accent!  Most of the people he helped were not Roman Catholic and he did not try to convert them. He used to say that his boss upstairs told him to help them first and worry about other things later.  He died still working - on a new project - a shelter for young children who escaped from the sex trade that the village is now famous for.  He worked closely with the local people to fund the operation.  If you are ever down that way check it out and you will be impressed at what American ingenuity can do. Y'all have a Happy New Year.  Oh yes, hopefully you were all spared the wrath of the Tsunami.  Reports we get here (in Baltimore) are horrific.  I come originally from Bermuda, a country with a population of 60,000.  Latest reports say many more than that were killed when the waves hit. Thailand seemed least harmed but even there thousands died.
Peace
(the Rev) Chaplain (retired) Tony Hollis


Godfrey (Pineapple) Akina - I was with Co B 809th Feb 9 67-Jan 69. Started out at Camp Vayama as dozer operator with "King Kamehameha" painted on the blade. Was also the bouncer at the EM club with Pfc Harris Dudoit. At Camp Lightning, "Kolohe" painted on the blade of the dozer.

In March of 67, myself, Dudoit, and a SSG Perreira went to a bar in Sattahip and witnessed an execution of a Thai man by the Thai police. I was nearly shot myself while trying to prevent the shooting. There were 5 other servicemen in the bar that witnessed this execution. They were either from Vayama or Utapao AFB. There was blood on our clothes when we returned to camp. It was the talk of the camp.

Can anyone recall this incident while stationed at Camp Vayama, Lightning, or Utapao AFB in March of 67?

Were YOU there at the bar when this happened?

(Godfrey Akina lives in Wailuku, Maui in Hawaii and can be contacted at through Pete's email: philarioTAT@hawaii.rr.com (remove the TAT). 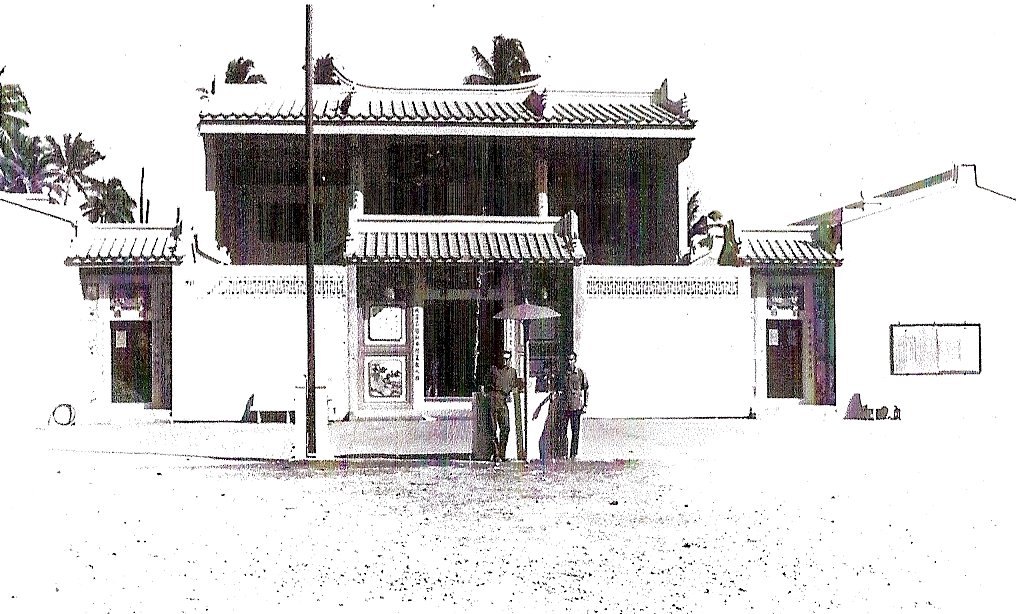 First, I would like to thank you for putting my pictures on your website.  I wonder if you could forward my letter to the group.  I would like to invite the group to visit the photo gallery and view some of my pictures.  I am going to give my story as I remember it.

Korat  must have been some type of Supply Depot with all types of vehicles that had fallen on disrepair.  Our mission, when we got there, was to bring up to operating condition a lot of the vehicles.  We had Bays where we worked.  They brought through the Bays, everything from 2 1/2 Trucks to Tanks.  We replaced batteries, did brake jobs, replaced fuel pumps, whatever the vehicle required.  In one of the pictures, you'll see the guys having a tool box inspection.  There is another picture, where it says "41st Ord Brake Van".  Even though the 3 guys are eating and drinking coffee out of the Van, it's not a "Break" Van.  We operated a direct exchange from the back of the Van.  Some of the Engineer types might remember it.  We gave out brake shoes, carburetors, starters, wheel cylinder kits, etc.  Some of the other Thailand sites show us to be some of Ammo Supply Co.  But as far as I know we were mechanics and machinists.

I would like to know if there is any other 41st Ord guys out there.  Or anyone who did business with us. I hope we gave good service.

I want to wish everyone a Merry Christmas!